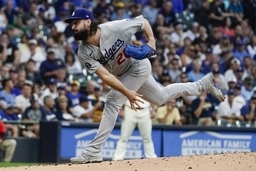 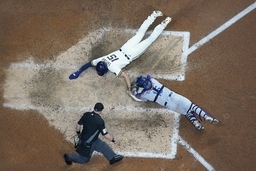 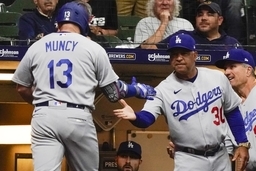 Los Angeles Dodgers' Max Muncy is congratulated by manager Dave Roberts after hitting a home run during the seventh inning of a baseball game against the Milwaukee Brewers Wednesday, Aug. 17, 2022, in Milwaukee. (AP Photo/Morry Gash) 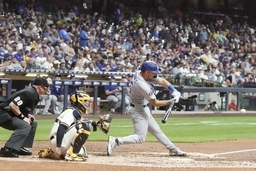 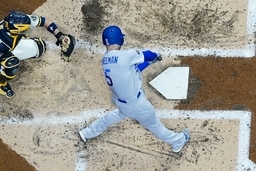 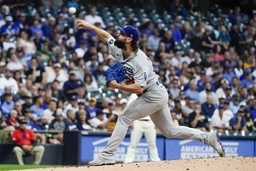 Gonsolsin (15-1) matched the Astros' Justin Verlander for the major league lead in wins. Los Angeles is 21-5 since the All-Star break and has the majors' best record at 81-35.

Craig Kimbrel, who blew a save in the Brewers' 5-4 win in 11 innings on Tuesday night, allowed two baserunners in the ninth but escaped for his 21st save.

Eric Lauer (8-5) pitched seven solid innings for the Brewers, allowing four hits in seven innings, including the two homers. He had been 6-0 with a 2.56 ERA in nine career starts against the Dodgers.

Gonsolin was dominant in his first career start against Milwaukee. He gave up two hits while walking one batter and tying his season high with eight strikeouts. The All-Star right-hander retired the first nine Brewers, throwing 28 of his 37 pitches for strikes in the first three innings.

Gonsolin walked Willy Adames in the fourth and allowed one-out singles in the fifth and sixth.

''I felt like I was throwing everything for strikes today, landing the curveball, throwing splitters in there for strikes when I needed to, same with the slider,'' Gonsolin said. ''I thought the fastball was pretty good, jumping a little bit, got a lot of foul balls with it.''

Los Angeles manager Dave Roberts said that ''at times in the past, you get through that third time in the order, the fastball's not as crisp, the breaking ball's not as sharp, but tonight it stayed consistent all night long through that seventh inning. Got to give a lot of the conditioning and the mindset that he has.''

Christian Yelich had an RBI single off reliever Caleb Ferguson in the eighth.

''When we got Gonsolin out of the game, we had good at-bats against their relievers,'' Milwaukee manager Craig Counsell said. ''That's what you want to do in innings like that, give yourself a chance and we did that, just didn't find a hole, didn't get the hit.''

Barnes opened the scoring when he hit the first pitch of the sixth inning into the Brewers' bullpen for his fifth home run. Barnes, reinstated from the family emergency list Tuesday, hadn't played since Aug. 6 and hadn't homered since May 21.

''It's been challenging, obviously,'' he said. ''I had to step away for three days, but it's nice to be out here and just play some baseball.''

Muncy went deep in the seventh.

''Shoot, this is what, realistically, playoff baseball is,'' said Keston Hiura, who had two of Milwaukee's four hits. ''You have pitchers going out there and competing and giving their best stuff and it's going to be close ball games. It comes down to defense and timely hits. At the end of the day, we had those hits last night and they had them today.''

Dodgers: Reinstated IF Edwin Rios from the 60-day IL (right hamstring strain) and optioned him to Triple-A Oklahoma City.

Roberts analyzed Kimbrel before the game: ''I think he's being too fine at times and I think he has the ability to be more efficient. I think sometimes he's chasing the strikeout instead of chasing outs and I just want to see consistent outs. It's a performance business, but with his track record, he's earned the right to get a longer look. But as we get into September, the best pitchers are going to pitch, that's just the way it has to be.''...Kimbrel said after the game: ''For a lot of reasons, I've got to start throwing the ball better, getting the ball over the plate and showing that I can dominate, not only for myself and feel comfortable, but to let everybody else feel comfortable going into the playoffs.''

LOOK AT THE LEATHER

The Dodgers' Freddie Freeman watched the scoreboard replay to see the double-play he was part of in the fourth inning. Freeman singled and was at first when Justin Turner hit a sharp grounder that second baseman Kolten Wong backhanded behind the bag. Wong flipped the ball underhand to Adames at shortstop. Adames leaped over the sliding Freeman and threw a one-hopper that was scooped by first baseman Rowdy Tellez.

Barnes has hit all five of his home runs this season in road games. He previously homered at Colorado, Minnesota, at the Cubs and at Philadelphia.

Gonsolin continued the domination of his own pitching and that of the Dodgers' pitching staff. In his last start, Gonsolin carried a no-hitter into the seventh inning in a win at Kansas City. Entering Wednesday, hitters had a lower average against Gonsolin (.173) than any pitcher in the majors, and Dodgers pitchers had the lowest ERA in the majors (2.88).