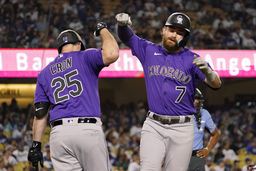 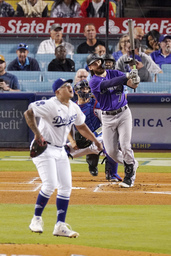 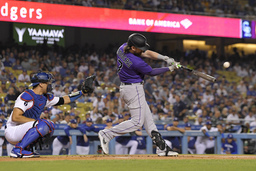 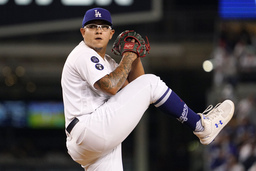 LOS ANGELES (AP) Julio Urias made his final tune-up for the postseason and case for the Cy Young Award a solid one, though the Colorado Rockies went ahead after he left and beat the Los Angeles Dodgers 5-2 on Tuesday night.

Urias pitched five innings and allowed two runs - both on solo homers. He will finish season as the National League's ERA leader at 2.16 with a 17-7 record.

Randal Grichuk hit a tiebreaking two-run homer off Andrew Heaney (4-4) in the seventh inning. It was Grichuk's 19th home run of the season.

Clayton Kershaw pitches the final regular season game Wednesday. The Dodgers have a bye and will be off until the NLDS begins Tuesday at Dodger Stadium. The Dodgers will play the winner of the New York Mets-San Diego Padres wild-card round.

The Dodgers were held to just five hits and have lost three straight to the Rockies. The Rockies, who have 93 losses, earned at least a split in the six-game series.

Daniel Bard pitched a scoreless ninth and earned his 34th save.

Brendan Rodgers homered for the Rockies, hitting his 13th of the season to give Colorado a 1-0 lead. Sean Bouchard also homered off Urias, a solo shot in the third inning to make it 2-0. Bouchard has six hits over the last three games.

Joey Gallo hit a pinch-hit solo home run in the fifth to tie the game at 2. It was his 19th homer of the season.

Urias threw 83 pitches, including 22 to get out of the first, and held the Rockies to four hits.

Ryan Feltner (4-9) earned the win after he pitched six innings and allowed two runs on four hits in his final start of the season. He struck out four and walked two.

Dodgers: OF Chris Taylor (neck) will start doing baseball activities on Wednesday. Dave Roberts said this weekend will be ''pivotal'' for him to see if he can be ready for the NLDS.