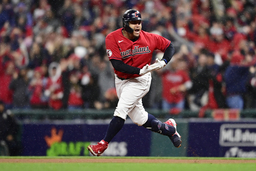 FILE- Cleveland Guardians' Josh Naylor celebrates as he runs the bases after hitting a home run in the fourth inning of Game 4 of a baseball AL Division Series against the New York Yankees, on Oct. 16, 2022, in Cleveland. Cleveland's fiery first baseman insists he wasn't taunting New York pitcher Gerrit Cole or the Yankees in last season's playoffs with an emotional home run celebration in Game 4 of the American League Division Series. (AP Photo/David Dermer, File)

CLEVELAND (AP) Josh Naylor's postseason ''baby'' has grown into something more than he intended.

That's when he rounded first base after connecting, playfully swinging his arms as if rocking a baby and appeared to scream a vulgarity toward Cole. Three months later, Naylor says his gestures were an attempt to inspire his teammates.

''I was doing that all year, but probably not as aggressive as I did there,'' Naylor said Saturday at Cleveland's Guards Fest. ''It was more so to get the guys fired up. I think the media made it look like I was doing at him (Cole) directly.

''I was doing it at the bench and I really wanted to fire up my guys because we were winning that series.''

When asked if he regretted his actions, Naylor initially said ''maybe.'' Not only did the Yankees rally to win Game 4 in Cleveland and even the series, but the AL East champions beat the Guardians 5-1 in Game 5 to advance to the ALCS.

Naylor was mocked by Yankees fans throughout the final game with chants of ''Who's your daddy?'' And New York second baseman Gleyber Torres trolled Naylor during the Yankees' postgame celebration by mimicking his ''baby'' action.

There were other moments of unrestrained emotion by Naylor last season while helping the Guardians, who had baseball's youngest team, win 92 games. He trash-talked with fans in Chicago following a late-inning grand slam that he punctuated by slamming his helmet into a dugout wall. In May, Naylor broke Cleveland manager Terry Francona's glasses with a head butt following a walk-off homer against Minnesota.

Naylor said he meant nothing personal toward Cole or the ''phenomenal'' Yankees. He also understands that his celebration was received differently in Cleveland than in New York.

''I was just trying to fire the guys up a little bit and get us some how, some way that win,'' he said. ''It wasn't anything personal. It was just to get the guys going. Like, we can do this.''

New York fans are unlikely to give Naylor a past on future trips to Yankee Stadium.

And to some degree, Guardians pitcher Triston McKenzie thinks Naylor's ''baby'' celebration rattled the Yankees: ''It's crazy that you guys (the Yankees) won that game, you won the next game. Rock the baby at us and we're still in your heads rent-free.

McKenzie then clapped his hands.