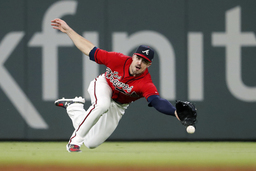 Atlanta Braves left fielder Adam Duvall dives for the ball on a single by Washington Nationals' Victor Robles during the sixth inning of a baseball game Friday, Sept. 6, 2019, in Atlanta. The Red Sox have agreed to terms with outfielder Adam Duvall on a contract that will pay him at least $7 million for 2023, a baseball official told The Associated Press on Wednesday, Jan. 18, 2023, speaking on the condition of anonymity because the deal is awaiting a physical.(AP Photo/John Bazemore, File)

The veteran outfielder can earn another $3 million in performance bonuses based on plate appearances. The sides agreed to terms last week, pending a physical.

To make room for Duvall on the 40-man roster, Boston cut former closer Matt Barnes - an All-Star in 2021 and a key member of the Red Sox bullpen for much of his nine-year career.

In a surprise move, the 32-year-old Barnes was designated for assignment, meaning the team has seven days to trade, release or send him outright to the minors. The right-handed reliever has more than $10.6 million remaining on his contract.

Duvall, 34, enters his 10th major league season, having played for the Giants, Reds, Marlins and two stints with Atlanta. He was an All-Star for Cincinnati in 2016 and won a Gold Glove for the Braves in 2021, batting .228 with 38 homers and an NL-leading 113 RBIs to help lead them to a World Series championship.

His addition helps the Red Sox keep Kike Hernandez in the infield, where they have lost shortstop Xander Bogaerts to free agency and his replacement, Trevor Story, to elbow surgery.

He developed into the team's closer and had 24 saves in 2021, making the AL All-Star squad before struggling in the second half and losing the job. He fell to 0-4 with a 4.31 ERA and eight saves in 44 appearances last year, striking out 34 batters and walking 21 in 39 2/3 innings.

Barnes, born and raised in nearby Connecticut, was drafted 19th overall by Boston in 2011 out of UConn. A converted starter, he is 32-30 with a 4.07 ERA and 47 saves in nine big league seasons with the Red Sox, and was the longest-tenured member of the team.

He ranks second in franchise history in relief appearances and strikeouts in relief.