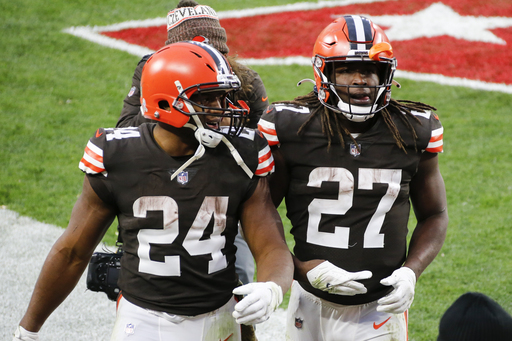 Cleveland Browns running backs Nick Chubb (24) and Kareem Hunt (27) walk off the field after an NFL football game, Sunday, Nov. 15, 2020, in Cleveland. Cleveland's dynamic duo of backs combined for 230 yards and helped the Browns (6-3) chew up the final five minutes in a 10-7 win over the Texans. (AP Photo/Ron Schwane) 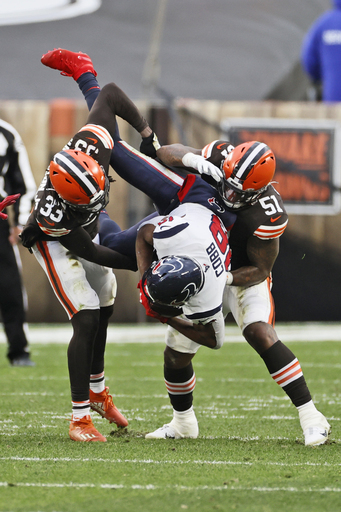 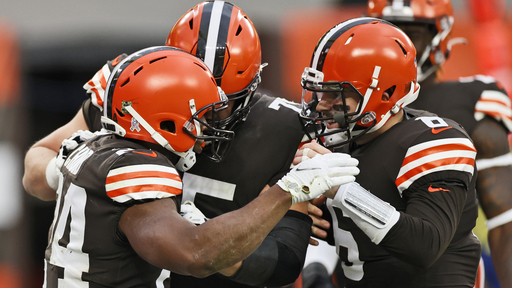 Cleveland Browns quarterback Baker Mayfield, right, congratulates running back Nick Chubb, left, after Chubb rushed for a 9-yard touchdown during the second half of an NFL football game against the Houston Texans, Sunday, Nov. 15, 2020, in Cleveland. (AP Photo/Ron Schwane) 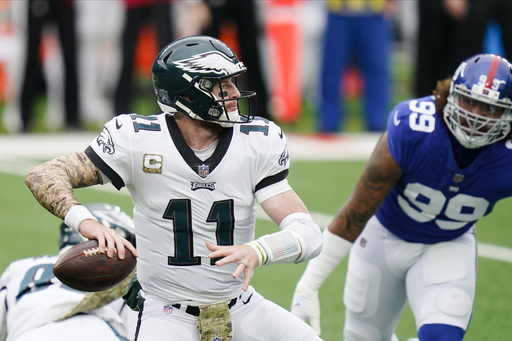 Philadelphia Eagles quarterback Carson Wentz (11) looks to throw a pass during the first half of an NFL football game against the New York Giants, Sunday, Nov. 15, 2020, in East Rutherford, N.J. (AP Photo/Seth Wenig)

CLEVELAND (AP) Before he ever soared - or, in the case of this season, sputtered - for the Eagles, quarterback Carson Wentz was connected to the Browns. They passed on the chance to draft him.

On Sunday, their paths cross again.

Wentz has been inconsistent, turnover prone and barely looked like himself for much of this season. Still, he's got the Eagles (3-5-1) leading the pathetic NFC East and they won't be an easy matchup for the Browns (6-3), who just may be a legitimate playoff contender.

Rewind to 2016. The Browns were desperate for a franchise quarterback, and their front office at the time was not enthralled with Wentz. So they traded the No. 2 overall pick and a fourth-round selection to the Eagles for five picks, including first-rounders in 2016 and 2017.

''Heck, yeah, I'd do it all over again,'' said Eagles coach Doug Pederson, who has stood by his QB through thick and thin. ''He's the guy we wanted back then, he's still the guy we want today. And I love everything about Carson Wentz, and he's a great leader for our team and our city.''

Wentz's stats in 2020 are alarming for a player of his stature.

One of the knocks on Wentz is that he holds the ball far too long, waiting to make a play. That's risky behavior, but at least this week Wentz won't have to worry about Browns defensive star and league sacks leader Myles Garrett, who will miss the game after testing positive for COVID-19.

Losing Garrett is a tough blow for the Browns, who are in playoff contention for the first time in years.

But despite what Wentz's numbers may show, Browns coach Kevin Stefanski respects his ability as a playmaker.

''It is not hard to see what he is capable of,'' Stefanski said. ''This year, he is making plays. You go back previous years, he is making plays. He is a unique talent in his size and his ability to move. He can make every single throw, so he presents a very, very real challenge for our defense.''

The Browns are coming off an ugly-yet-impressive win over the Houston Texans. With 60 mph wind gusts making it nearly impossible to throw, Cleveland turned to Nick Chubb (126) and Kareem Hunt (104) and both went over 100 yards rushing in the 10-7 victory.

With rain in the forecast, the Browns figure to stay grounded with their Chubb-Hunt punching combination again.

Eagles safety Rodney McLeod said it's the kind of game where everyone needs to buckle their chin straps a little tighter.

''It's gonna be a battle,'' McLeod said. ''Those are two good running backs and you know exactly what run plays that are coming - and it's can you stop it? They're dynamic, they run hard. Everybody has to play their part and we have to get a lot of hats to the ball.''

Browns quarterback Baker Mayfield may have played at Oklahoma, ''where the wind comes sweepin' down the plain.'' But he's never experienced anything like the blustery conditions Cleveland faced in its past two home games.

''The two windiest games I have ever been a part of,'' he said.

With gusts over 50 mph in both games, Mayfield went a combined 24 of 45 for 254 yards in a loss to Las Vegas and win over Houston, but he acknowledged missing some throws because he didn't play the wind correctly. He needs to fix that.

''Just learning that on some of these throws, you really had to put some mustard behind them and try and judge the wind as best as possible,'' he said.

ONCE UPON A TIME

Pederson won three games as a starting quarterback, one with Cleveland.

In 2000, Pederson replaced injured starter Tim Couch and went 1-7 with the Browns, who knocked off New England and former Cleveland coach Bill Belichick.

''That was obviously one of the high points of that season,'' he said. ''We ended up 3-13 that year, but that was definitely a high point.''

''A great sports town,'' he said. ''It is an exciting place to play any kind of professional sports, whether it is basketball, baseball or football. I loved living there. I know the team was not as good, but at the same time, it was a great experience for me.''

Cleveland's running game is both unique and unmatched. Chubb finished second to Tennessee's Derrick Henry for the rushing title a year ago, and Hunt led the NFL as a rookie with Kansas City in 2017.

Eagles defensive coordinator Jim Schwartz knows his unit will be facing its most daunting challenge this season.

''They know what they want to do in the run game,'' Schwartz said. ''Nothing sort of takes them out of it. There's not a whole lot you can do scheme-wise that forces them to do something else. They are going to run it.''

Wentz's struggles can be attributed to a number of things: inaccuracy, injuries, lineup changes. Calling plays has been a problem, too.

Pederson acknowledged that he needs to do a better job of moving Wentz outside the pocket. On the two plays he called last week to slide Wentz to the edge, the Eagles gained 40 yards.

''I think I can do more,'' Pederson said. ''We did a couple in the game the other day and they worked. I think I can dial some more up and get him out, because he is dynamic out there.''