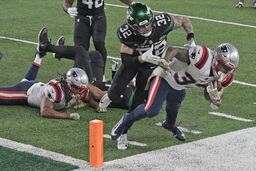 New England Patriots' Damien Harris, right, is pushed out of bounds by New York Jets' Ashtyn Davis (32) just before the end zone during the second half of an NFL football game, Monday, Nov. 9, 2020, in East Rutherford, N.J. (AP Photo/Bill Kostroun) 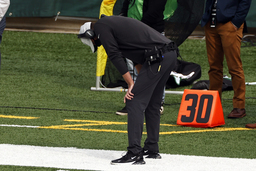 New York Jets head coach Adam Gase reacts during an NFL football game against the Arizona Cardinals, Sunday, Oct. 11, 2020, in East Rutherford, N.J. From the unbeaten Steelers at the top to the winless Jets at the bottom, predictability has taken a hike halfway through NFL 2020. (AP Photo/Adam Hunger) 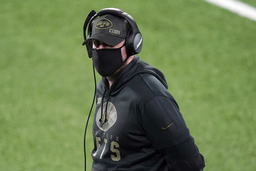 In this Monday, Nov. 9, 2020, file photo, New York Jets head coach Adam Gase walks on the sideline during the first half of an NFL football game against the New England Patriots in East Rutherford, N.J. The Los Angeles Chargers host the winless Jets on Sunday, in a midseason matchup of struggling teams. (AP Photo/Corey Sipkin, File) 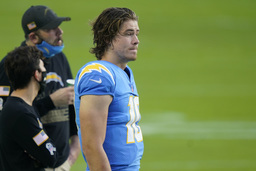 Los Angeles Chargers quarterback Justin Herbert (10) stands on the sidelines, during the first half of an NFL football game against the Miami Dolphins, Sunday, Nov. 15, 2020, in Miami Gardens, Fla. (AP Photo/Lynne Sladky) 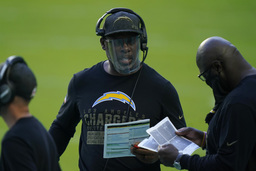 Los Angeles Chargers head coach Anthony Lynn, center, talks to his staff on the sidelines during the first half of an NFL football game against the Miami Dolphins, Sunday, Nov. 15, 2020, in Miami Gardens, Fla. (AP Photo/Lynne Sladky)

The Jets are the 27th team since the merger to go without a win in their first nine games. Meanwhile, the Chargers are on a three-game losing skid along with dropping seven of their past eight games.

''You can't take anyone lightly. I learned that because I've been in this situation before,'' Bosa said. ''I liked to think we have a talented team, but we are 2-7 right now. It is important for us to stay locked in.''

Bosa brought up the Chargers' Christmas Eve game at Cleveland four years ago, when the 0-14 Browns held on for a 20-17 victory after Josh Lambo's field goal attempt sailed wide right as time expired. That game sealed Mike McCoy's fate as coach and led to the hiring of Anthony Lynn.

New York will try to become the eighth team to get its first victory in its 10th game. The Jets come in rested off of their bye week and a narrow loss to New England on Nov. 9. They had a 10-point lead midway through the fourth quarter before the Patriots scored 13 points in the final 6:04 to emerge with a 30-27 victory.

The Jets have been shaking up their roster over the past several weeks and had 10 rookies see action against the Patriots. The secondary will have three rookie cornerbacks with the recent releases of Quincy Wilson and Pierre Desir. Those are the latest moves in a year that has seen the Jets also part with running back Le'Veon Bell along with trading Avery Williamson and Steve McLendon.

Coach Adam Gase has been on the defensive about getting younger and trying to dispel the perception the Jets are tanking to get the first pick in the draft.

''I think where we're at right now, we're really looking to play as many of these young guys as possible,'' Gase said. ''I mean, you watch these guys come off the field, whatever they have, they're giving it. We've just got to figure out a way to finish these games to where we're winning the game, we've got one more point than the other side.''

The Chargers are looking to bounce back after being outplayed in all three phases last week at Miami. All six of their losses have been by eight points or fewer. Despite the close margins, the frustration level continues to rise.

''At the end of the day, when we're presented opportunities to make plays, we have to,'' Bosa said. ''The difference in every one of our games is two or three plays. So if we turn the tide on two or three of those plays, I think every game could be different this year.''

Joe Flacco threw three touchdown passes against New England in the Jets' last game - the same total Sam Darnold had in the six games he started. Flacco gets his fourth start of the season with Darnold still sidelined with a shoulder injury.

Gase's offense has struggled all year, ranking last in the NFL in several categories. They have just 10 TDs on offense this season. But with all three of the team's top wide receivers - Jamison Crowder, Breshad Perriman and Denzel Mims - playing together for the first time against New England, there's some new optimism the Jets and Flacco can continue getting on the scoreboard more frequently.

Rookie running back La'Mical Perine has gotten more snaps lately, but 37-year-old Frank Gore continues to see lots of action despite the focus on young players getting on the field.

Despite Gore getting more work, including playing 23 snaps compared to Perine's 21, Gase anticipates that changing in the second half of the season.

Los Angeles QB Justin Herbert is the first rookie to throw multiple touchdowns in six straight games. A TD pass on Sunday would tie him with George Ratterman as the fourth-fastest player to throw 20 TD passes in NFL history. Patrick Mahomes, Deshaun Watson and Kurt Warner did it in eight games.

Herbert struggled last week against Miami, throwing for a season-low 187 yards. The Jets defense is ranked 29th against the pass, but is similar to the Dolphins because coordinator Gregg Williams likes bringing plenty of pressure packages. New York rushes five or more on 36.6% of its defensive snaps, which is eighth in the league.

If the Chargers have any hopes of winning, they will need to turn things around on special teams. Los Angeles has had a punt blocked in two of its last three games, is near the bottom of the league in return and coverage averages and has committed a league-high 14 penalties.