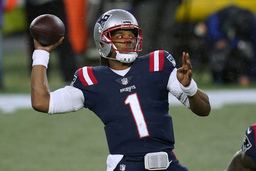 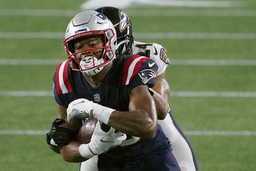 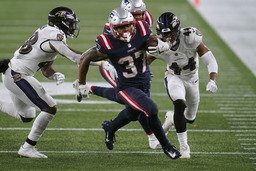 FOXBOROUGH, Mass. (AP) Cam Newton was adamant at the trade deadline that the answers to the Patriots turning things around were already within their locker room. Over the past two weeks his teammates have done their best to fulfill their quarterback's prophecy.

Currently sitting at third in the AFC East and in 10th place in the conference, it will take more than a couple of wins to get New England back into the playoff conversation, with matchups with the Cardinals, Rams, Dolphins and Bills - all owning winning records - still on tap. But the best news for their prospects is Newton says he's experiencing a comfort level under center he hasn't felt since before he tested positive for the coronavirus in early October.

''Ever since coming back from corona, to be honest with you, I felt stagnant in my thought process,'' Newton said.. ''The pre-snap production wasn't happening fast enough for me in games. Did it happen in practice? Yeah, but still not fast enough. Even still now I can get better. So each day, each week is an opportunity for me to really hone in on this offense and just do my job. That's what it really boils down to.''

Newton remains adamant that his struggles aren't tied to any lingering effects from COVID-19. He instead believes the lost continuity was the biggest factor in his throwing seven interceptions in his first five games, and virtually being reduced to a running back in the offense.

''It showed, coming back pretty much dry,'' he said. ''Identifying, communicating with the offensive line, with the receivers, with the running backs - it's my job to do so. Coming back, I just felt behind. The production here of late is nothing to blame; more or less than me just taking ownership and responsibility that I've just got to be better.''

Since New England's 33-6 loss to San Francisco in Week 7, Newton hasn't thrown an interception. His quarterback rating has also increased from a season-low 39.7 against the 49ers toa season-best 114.3 rating last week against Baltimore.

It's been a remarkable resurgence considering Newton has managed to do it without veteran receiver Julian Edelman, who has been on injured reserve since Oct. 31. Stepping up to fill the void have been Meyers and Harris.

Harris has rushed for more than 100 yards twice over the past three games, including a career-high 121 yards against the Ravens.

Meyers was instrumental in the Patriots' win over the Jets on Nov. 9, catching a career-high 12 passes for 169 yards to help them snap a four-game skid. The 2019 undrafted rookie was at it again last week in Sunday's 23-17 win over the Ravens. He not only led his team with five catches for 59 yards, but also showed off his skills as a former high school quarterback, throwing a 24-yard, go-ahead touchdown pass to Rex Burkhead in the second quarter.

It the fulfillment of the ''star'' potential Newton says he saw in then-16-year-old when Meyers participated in the 7-on-7 tournaments Newton's foundation sponsored for players outside of Atlanta. Alums of those camps include Texans quarterback Deshaun Watson as well college players such as Auburn quarterback Bo Nix, Georgia receiver George Pickens and Oklahoma receiver Jadon Haselwood.

It's that same potential that prompted Newton to pull Meyers aside for a pep talk prior the Patriots' Week 6 matchup with Denver. Meyers was inactive for that game and had caught only one pass in his first three appearances of the season.

Newton told him not to be discouraged and reminded him of how far he'd come. Over the past three games Meyers has responded with a team-high 23 receptions.

''It's good to be out there, be able to play, and show what I can do,'' Meyers said. ''Hopefully, everybody trusts me, trusts to keep throwing me the ball and making those plays. I'm definitely trying to build off this momentum and hoping to get better every week.''

He said Newton's past mentorship and leadership this season have parallels.

''Even when people hated on him and talked bad about him, he still came in every day and performed,'' Meyers said. ''It just showed who he was, his personality. Honestly, it's great. He's a guy who gives a lot of us hope. Come in and be ourselves, but still perform like we know we can.''