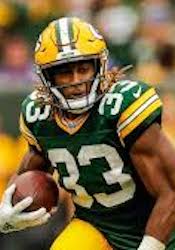 Jones can do well in Week 10

Believe it or not, we are already halfway through the NFL regular season. We still have bye weeks to deal with since four more teams will be off for Week 10. Among the teams that are still set to take the field, here are some players to consider for your DFS entry, as well as a few to possibly avoid.

Kyler Murray, ARI vs. BUF ($7,000): Few players have as high of a floor as Murray based on his ability to contribute through the air and with his legs. He has 24 total touchdowns to go along with 2,130 passing yards and 543 rushing yards. Quarterbacks have hurt the Bills on the ground since they have allowed four rushing touchdowns to them this season. The Bills’ defense hasn’t been nearly as formidable this season, so expect Murray to go off, once again.

Drew Lock, DEN at LV ($6,300): Expect to see Jared Goff ($6,300) included in a lot of entries for his matchup with the Seahawks, who have allowed the most passing yards per game in the league. If you’re looking to differentiate yourself in tournament play while still saving at the quarterback spot, then Lock should be on your radar. He has six total touchdowns across his last two games and will be facing a Raiders team that has allowed the seventh-most passing yards per game.

Cam Newton, NE vs. BAL ($5,800): This could be a disaster for the Patriots, who barely eked out a win against the lowly Jets in Week 9. Now they have to face the Ravens, who have allowed a league-best 17.8 points per game. Newton hasn’t thrown a touchdown pass since Week 3, but has remained a viable DFS option because of his ability to rack up yards and touchdowns with his legs. That could be a problem for him this week, though, with the Ravens allowing the eighth-fewest rushing yards per contest.

Aaron Jones, GB vs. JAC ($7,400): Jones made his return from injury to rush for 58 yards on 15 carries against the 49ers in Week 9. He’s had added time off to rest since they last played on Thursday Night Football, so expect him to have another heavy workload in this contest. That could leave him with a monster stat line given that the Jaguars have allowed the sixth-most rushing yards per game.

Duke Johnson, HOU at CLE ($5,500): The Texans lost David Johnson to a concussion early in last week’s game against the Jaguars, which left Duke Johnson to take over as their lead running back. He responded with 16 carries and four receptions for 73 total yards and a touchdown. If David is unable to play this week, then Duke should once again be busy with very little depth behind him at running back.

Jamaal Williams, GB vs. JAC ($7,000): This salary makes little sense for Williams now that Jones is healthy. Before Jones went down with his injury, Williams hadn’t played in more than 57.1 percent of the Packers’ offensive snaps in a single game this season. Jones’ salary is only $400 more, so there’s no need to overthink this one. Stay away from Williams.

Davante Adams, GB vs. JAC ($9,100): This one is pretty simply. Adams has played five full games this season and has received at least 10 targets in each of those contests. He has 10 red-zone targets across his last three contests, which helped him post six touchdowns during that stretch. The Jaguars are allowing an average of 30.9 points a game, which leaves Adams with tremendous upside.

Cooper Kupp, LAR vs. SEA ($6,800): Heading into a Week 8 matchup against the Dolphins, Kupp had been quiet with 14 catches for 120 yards across his previous three games. The good news is that he broke out of his slump in a big way, catching 11 of his whopping 20 targets for 110 yards. If he receives double-digit targets in this matchup against the Seahawks’ porous defense, he could go off in a big way.

A.J. Green, CIN at PIT ($6,100): This is an easy pass. After back-to-back games with at least seven catches, Green came back down to Earth in Week 8 with two catches for 19 yards against the Titans. Heading into the Bengals’ bye, he had posted 36 receiving yards or fewer in five of eight games. With the Steelers allowing the fifth-fewest passing yards a game, it’s difficult to envision him providing a valuable stat line.

T.J. Hockenson, DET vs. WAS ($5,500): Washington has struggled against opposing tight ends this season, allowing the sixth-most fantasy points per game to the position. That should be music to the ears of Hockenson, who leads the Lions with 49 targets. He’s also received at least two red-zone targets in four of his last five games.

Auston Hooper, CLE vs. HOU ($4,500): Before Hooper needed an appendectomy, he was playing well for the Browns. He had received at least six targets three straight games and had back-to-back contests with at least 52-receiving yards. With both the Browns and the Texans allowing an average of at least 29.6 points per game, this could be a high-scoring affair in which Hooper once again sees an added target share.

Hunter Henry, LAC at MIA ($5,100): Don’t look now, but the Dolphins are tied for the fourth-fewest points allowed per game (20.1). The only teams that have been better are the Ravens, Rams and Colts. That’s good company to be in. They have been particularly tough on opposing tight ends, allowing 30 catches for 299 yards and two touchdowns to the position. Henry is already coming off of five straight games with fewer than 40-receiving yards and this doesn’t shape up as a favorable matchup for him to get back on track.