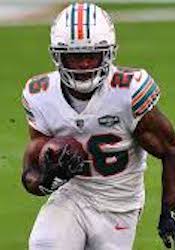 Ahmed is No. 1 back for Miami

It has been said before here, but the later the season goes the tougher it can get on the waiver wire. There can be some weeks that have a lot of options out there, but this doesn’t look like one of those weeks late in the year. There are a few players to consider, but it is getting tougher and tougher these days to find quality options to help your team. With that said, here are some players to consider for Week 11. . . . .

Jameis Winston, Saints. The injury to Drew Brees opens the door for Winston to possibly get a few starts for the Saints unless they really turn to Taysom Hill, which doesn’t seem likely. Winston might have some turnover issues but you have to like his chances for the big game in this offense. He is more than capable of producing big, so don’t hesitate to pick him up and use him in the right matchup. He certainly has a high ceiling.

Alex Smith, Washington. Smith has just a score his last two games but hit the 300-yard mark in each of those games. He still almost scored 20 fantasy points last week despite not scoring a touchdown. Smith has potential in the right matchup, making him spot start material for fantasy teams. He has some turnover concerns but can get some yards and possible scores in this offense.

Salvon Ahmed, Dolphins. Ahmed is becoming the No. 1 back for the Dolphins with Myles Gaskin hurt. He had a big game last week, rushing 21 times for 85 yards and a touchdown. He has 123-rushing yards his last two games. As long as Gaskin is out of the lineup, Ahmed has some fantasy value. He is making some plays in this offense.

Marquez Valdes-Scantling, Packers. Valdes-Scantling had his best game of the season last week, catching four passes for 149 yards and a touchdown. He has found the end zone each of his last two games. Allen Lazard is back soon but even when he returns, Valdes-Scantling is more than capable of making plays in this offense. He remains available in 69 percent of leagues.

Michael Pittman, Colts. Pittman continues to emerge in the Colts offense. He had his first 100-yard game as a pro last week, catching seven passes for 101 yards. He has been targeted 15 times his last two games. He is a playmaker and gaining a rapport with Philip Rivers. He could be a factor down the stretch for fantasy teams. He is available in 80 percent of leagues.

Josh Reynolds, Rams. Reynolds seems to be getting more and more looks in the Rams passing game. He had season highs in receptions (eight) and yards (94) last week. He has been targeted at least eight times three straight games. He is not going to produce huge numbers but has good spot start potential, having double-digit fantasy points three of four games.

Marvin Hall, Lions. Hall keeps making big plays in the Lions offense. He had two receptions for 61 yards and a score last week. He has 14-plus fantasy points two of three games. He is capable of the big game any given week in a starting role while Kenny Golladay is out of the lineup.

Logan Thomas, Washington. Thomas has a season high in yards last week, catching four passes for 66 yards. He has at least four receptions five of nine games. He isn’t flashy but gets consistent work as the starter in this offense. The tight end position is a mess, so Thomas is a legit option at this point. He is scoring some fantasy points and remains available in 48 percent of leagues.

Jordan Reed, 49ers. Reed was much more involved in the offense his second game back from injury, catching five passes for 62 yards. He had a season high in yards. This was his second double-digit fantasy point performance. Reed is a solid fantasy play while George Kittle is sidelined. He has some real potential for the rest of the season.