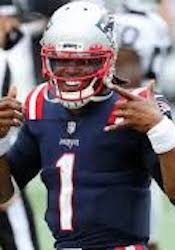 Injuries continue to be a common theme across the NFL. A few key ones will create added opportunities for other players to contribute, some of which should be firmly on your radar for DFS in Week 11. Let’s discuss a couple of players to target at each position, as well as some to possibly avoid.

Derek Carr, LV vs. KC ($5,800): Carr is probably going to have to throw at will in this game. Most of the Raiders defense has spent the week on the reserve/COVID-19 list. While they could be activated before this game as long as they continue to provide negative tests, they will have missed a lot of practice. That spells trouble against the loaded Chiefs’ offense. The last time these two teams faced off, Carr was excellent with a season-high 347 passing yards and three touchdowns.

Ryan Tannehill, TEN at BAL ($6,200): The schedule hasn’t done the Titans any favors lately. Their last two games have come against the Bears and Colts, two of the best defensive teams in the league. This week won’t get any better against the Ravens, who have only allowed an average of 18.3 points a game. Tannehill already has trouble racking up passing yards in the Titans’ run-heavy offense, so if passing touchdowns will be hard to come by in this game, as well, it’s difficult to justify adding him to your lineup when both Newton and Carr can be had for lesser salaries.

Alvin Kamara, NO vs. ATL ($8,000): One of the big new injuries heading into this week is the Saints losing Drew Brees (ribs). Jameis Winston will now take over under center and will likely be a popular DFS option against the struggling Falcons’ defense. However, don’t forget about Kamara, who should be as busy as ever. He posted three total touchdowns last week and has six games with over 100 total yards this season. He’s also recorded at least five receptions in all but one game this season. The only week that he didn’t, he tied his season-high with 83-rushing yards.

Kalen Ballage, LAC vs. NYJ ($6,000): I’m not focusing on Ballage because of the revenge-game narrative against Adam Gase. The reason to target Ballage for your entry is that he’s emerged as the top running back for the Chargers with Austin Ekeler (hamstring/knee) out. Across the last two games, he has 33 carries for 137 yards and a touchdown while also catching seven of nine targets for 49 yards. The Jets defense hasn’t been awful against the run, but Ballage’s increased workload and the fact that the Chargers could win this one going away makes him a potential steal at this salary.

J.K. Dobbins, BAL vs. TEN ($6,700): This salary baffles me. The Ravens backfield has been split between Dobbins, Mark Ingram and Gus Edwards, which doesn’t make any of them appealing options. Last week in a rain-soaked game against the Patriots, Dobbins received only five carries. The only two times he received double-digit carries in a game this season was when Ingram was out. With this trio all healthy, Dobbins should be avoided.

Keenan Allen, LAC vs. NYJ ($7,600): Allen was held in check by the Dolphins last week, catching only three passes for 39 yards. He did find his way into the end zone, but his seven targets were the fewest in any game this season that he didn’t leave early because of an injury. The Dolphins are a very strong defensive team. The Jets have allowed the fourth-most passing yards per game, so expect a very different outcome for Allen here.

Jakobi Meyers, NE at HOU ($5,700): Remember the old Dos Equis commercial where the guy says, “I don’t always drink beer, but when I do, I prefer Dos Equis”? Well, Newton doesn’t always throw the ball, but when he does, he’s preferred to throw it to Meyers lately. With few healthy options around him, Meyers has received 37 targets over the last four games, turning them into 27 catches and 346 yards. Julian Edelman (knee) is still on IR, so expect Meyers to remain busy in this favorable matchup.

Jarvis Landry, CLE vs. PHI ($6,400): Another easy pass for me here with Landry. He hasn’t caught more than five passes in a game all season with the Browns primarily focused on running the ball. He only has three games with over 50-receiving yards and hasn’t caught a touchdown pass yet. Potentially spending a significant portion of this game being cover by star cornerback Darius Slay likely won’t help his cause in this matchup.

Travis Kelce, KC vs. LV ($7,200): If you can squeeze his salary into your lineup, Kelce is the man to roll with at tight end. The last time he played the Raiders, he caught eight of 12 targets for 108 yards and a touchdown. He has at least 100 yards three of his last five games and has already caught six touchdowns, one more than he had all of last season. The Raiders have allowed the eighth-most passing yards per game, so expect Kelce to be productive in their rematch, as well.

T.J. Hockenson, DET at CAR ($5,200): For the first time all season, Hockenson did not have either 50-receiving yards or a touchdown reception in his matchup last week versus Washington. That says something about his consistency. Don’t expect him to be held down for long, considering the Panthers are tied for the fourth-most receptions allowed to tight ends.

Jonnu Smith, TEN at BAL ($5,200): Smith has been almost non-existent of late. Across the last five games, he has a total of eight catches for 97 yards and a touchdown. The problem is that he only received 16 targets during that stretch. That’s a stark contrast to the 27 targets that he received over the first four games of the season. With his role decreasing and a tough matchup against the Ravens, there’s not much to get excited about here.