Packers' Adams returns to practice, 'good to go' on Sunday 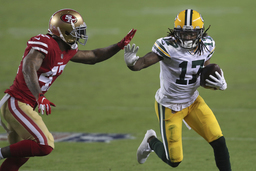 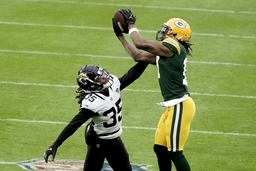 The injury had prevented Adams from practicing Thursday.

''I think he's made good progress,'' Packers coach Matt LaFleur said Friday. ''He should be good to go.''

Adams hurt his ankle Sunday in a 24-20 victory over Jacksonville. The injury caused him to leave the game temporarily, but he returned to catch the winning touchdown pass with just over nine minutes remaining.

''Anytime where I feel like I can come back into a game like that, typically speaking my mindset going into the next week is that I'll be able to roll,'' Adams said Wednesday during his weekly media availability. ''Like I said, we're doing all the things right, right now to make sure I'm as pain free and not limited come Sunday, and that's where we are.

Adams sat out victories over New Orleans and Atlanta earlier this season with a hamstring injury, though he still has nine touchdown catches to tie Minnesota's Adam Thielen, Kansas City's Tyreek Hill and Seattle's DK Metcalf for the NFL lead. Adams has 61 overall catches for 741 yards for the Packers (7-2).

''An ankle is a little bit different than a hammy in the sense that you kind of tough through it depending on how you're feeling, but a hamstring is one of those ones where you can either go or you can't,'' Adams said. ''That's the difference there.''

Even with Adams on the field, the Packers' receiving corps might not return to full strength against the Colts (6-3). The Packers activated Allen Lazard from injured reserve this week, but his status for Sunday's game remains uncertain. Lazard has missed six games with a core injury and is listed as questionable.

''He's been making progress, but we'll see how he's feeling,'' LaFleur said. ''Hopefully he'll be able to go, but I think it's going to be more something that we'll figure out Sunday.''

Green Bay is expected to have starting cornerbacks Jaire Alexander and Kevin King available after both sat out the Jaguars game. Both were full participants in Friday's practice. King has missed five games with a quadriceps injury. Alexander has been dealing with a concussion and a hand issue.